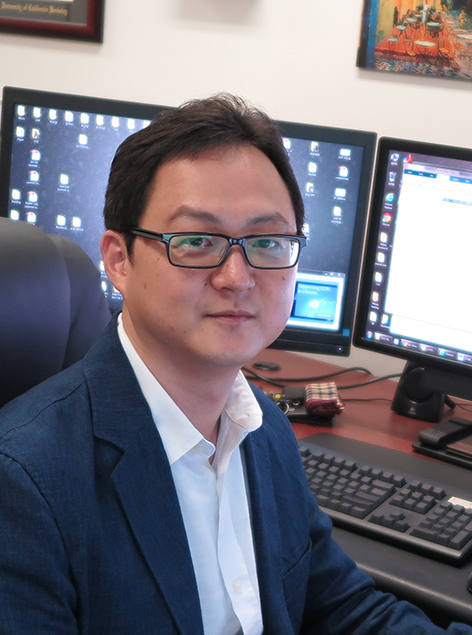 The brain is composed of various functional circuits of neural circuits for the processing of information. In particular, neural circuits in the visual system are of great interest because all of the complicated functions of the brain must originate from the most fundamental functions of the brain, i.e., those related to vision. Despite the rapid progress in neuroscience research, the origin of visual functions remains elusive, though researchers must explain the spontaneous development of intelligent functional circuits in the visual cortex. Our research has focused on finding a theory that explains how the architecture of the visual system is initially created to generate the building blocks of visual perception.
Our research is mostly performed while utilizing theoretical modeling and computational simulations. This allows us to attack problems from different directions and to see the big picture with regard to principles in the brain. Unlike physics, biological studies of the brain have not successfully provided the fundamental principles of brain dynamics, such as “F = ma” in classical mechanics. Thus, numerous experimental results are being conducted every day, but they cannot effectively provide insight into the spontaneous developmental mechanisms of brain functions. Pursuing a theoretical basis may address this issue and suggest a new direction in brain research. Our research can help us better understand how functional structures in the brain develop and operate for the optimal processing of information. The main directions of our current work are described below.

I. Development of functional circuits in the early visual system
The biological brain develops its visual circuits without training

Recently machine learning techniques such as deep neural networks have successfully achieved high-level visual recognition performance comparable to humans. However, unlike artificial intelligent systems that produce functions from the training of big data sets, biological brains generate circuits for visual functions from birth, without any experience or training. Our first research goal is to investigate how the brain initially develops circuits for visual functions spontaneously. 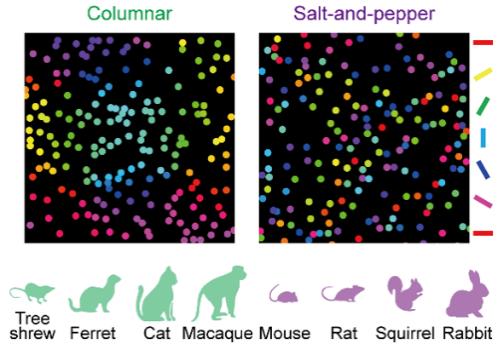 Machine learning techniques such as the use of a deep neural network utilize brain-like structures to perform visual classification, but this normally requires a very large number of processing layers and filters as well as high computational resources. In contrast, the visual system in the biological brain has limited resources due to the strict physical constraints of the brain. This leads to the question of what the strategy of the brain may be to overcome this disadvantage and acquire efficient information processing. We search for critical factors in relation to neural circuit design that implement novel strategies of the biological brain in contrast to those of artificial machines.

Visual perception in biological systems is flexible and adaptive to variations of external conditions, showing highly robust performance under various conditions. For example, the human visual system successfully performs image classification or object recognition, even when the type of visual stimulus randomly changes, or when the given visual information is extremely noisy or ambiguous such that it is not easily recognizable. Recently, researchers in computer vision have attempted to implement these characteristics of human visual perception using machine learning techniques by introducing a temporary memory system such as long-short-term-memory (LSTM). Our neural network model of flexible and stable memory can provide a new algorithm pertaining to the temporal storage of visual information for the next-generation model of machine vision.

With insights and expertise in human visual processing, we develop various visual classification and analysis algorithms to address issues which have arisen in relation to analyses of experimental big data, collaborating with a number of other experimental groups in related fields. By eliminating certain critical hurdles from visual data analysis, our tools have helped experimental neuroscientists easily perform visual inspections of their data, make more precise classifications and calibrations of brain structure images and activity patterns, and understand what the underlying principles of their results may be. 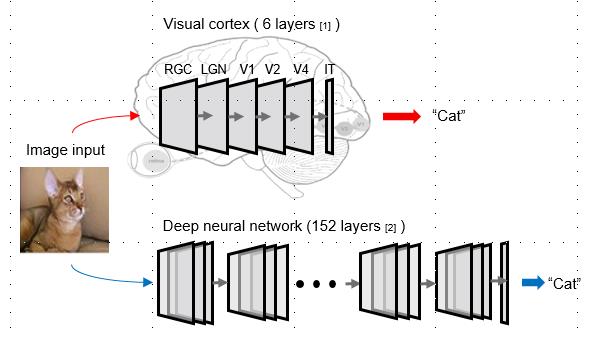 Results in our previous publications suggest that biological brain organizes the functional circuits of visual cortex in very efficient way. First, it generates most of the fundamental units of visual tuning spontaneously, without any visual experience or training. Second, the brain makes an efficient tiling of tuning units in the visual cortex so that every hyper-column in V1 contains a complete set of orientation, direction, and frequency tunings. Our interest is in how to utilize this biological mechanism of learning-free organization for the development of artificial vision models. From the spontaneous developmental model of V1 functional circuits we previously reported, we would like to suggest a new type of computer vision model that does not rely on the initial training of big data sets, as does the current deep neural network model, and that optimizes efficiently its organization of tuning units according to given physical constraints, as the biological brain does. This study may provide new insight into future directions in the area of biology-inspired computer vision.