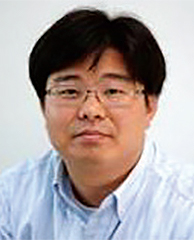 The major achievement of our lab (Brain dynamics laboratory) this year is on Vulnerability-based critical neurons, synapses, and pathways in the Caenorhabditis elegans connectome. One of the most important scientific aims is to uncover the functional design principles of nervous systems. A true understanding will lead to wide-ranging advances in fields from psychiatry and medicine to the engineering of intelligent devices. To reach this aim, it is useful to examine a complex nervous system that is both well specified and highly tractable, making the nematode roundworm Caenorhabditis elegans an attractive model system, especially since it is the only complete connectome currently available for analysis.

Although considerable progress has been made in delineating behavioral circuits of the C. elegans, many details remain unclear, not only with respect to the specific functions of every neuron and synapse, but also the extent to which the behavioral circuits are largely separate and parallel versus having a more integrative and serial design (i.e., input - central processing - output) in which, for example, interneurons participate in multiple behavioral functions. Network analysis provides a normative approach to analyze the nervous system structure, and vulnerability analysis helps provide a more experimental and less assumption-laden analysis of individual component contributions to information processing.

In this study, we tested the effects of individual attacks on every neuron and synaptic connection in the Caenorhabditis elegans connectome to identify and characterize the most critical constituents of the network. Specifically, we investigated the vulnerability of the connectome network by (a) attacking each of 279 individual neurons and 2,990 weighted synaptic connections (composed of the 6,393 chemical synapses and 890 electrical junctions) and (b) quantifying the lethality of the connectome network in terms of global information processing using graph-theoretic measures. To our

knowledge, this is the first study to analyze network robustness with individual attacks on every node and edge of an entire nervous system. 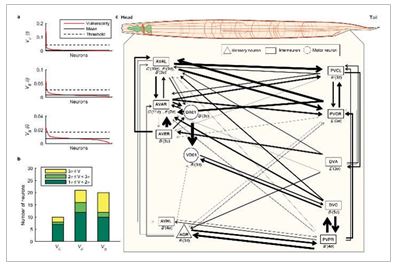 Our analysis identified 12 neurons and 29 synapses critical to clustering, information integration and propagation. Although one might have expected that the measures of overall network clustering, efficiency, and betweenness would be driven mostly by the same properties of the individual neurons (e.g., overall network clustering driven mostly by the clustering values of the individual neurons), this is not what we found. In fact in no case was the same individual nodal property the leading factor influencing the network-level property. Our results can be explained by taking an evo-devo developer’s perspective, in which control structures — i.e., those that influence multiple others — prove the most influential at the network-level, providing the most ‘bang for the buck’. Thus, to most affect clustering, new neurons should project paired synapses to neighbors. To most affect global efficiency, new neurons or synapses should be placed in central positions that shorten the largest number of prior existing pathways. Finally, to most affect network traffic flow, new neurons or synapses should provide new pathways that decrease a larger number of path lengths and should also normally link to other control structures, leading to the formation of directed chains of control units (i.e., node1 -> node2 -> node3).

In sum, we show with clear evidence that the most critical neurons and synapses are control structures. We found that the critical synapses formed pathways, producing circuit-level control structures in the connectome. We also found that these emergent pathways matched closely with known biological circuitry in the C. elegans nervous system, thus implicating backward locomotion, avoidance behavior and social feeding behavior as fundamental biological functions. We believe our study provides a significant advance in the understanding of the network topology of the C. elegans connectome, and provides insights into the fundamental architectural design of complex nervous systems.